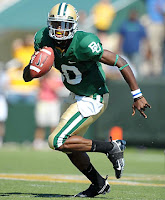 The city of Waco is buzzing about one of our own in the running for this years Heisman Trophy. Baylor University's Robert Griffin III (RG3 around these parts) is only the second player in Baylor history to be a finalist.

The local sports talk show asked if RG3 was the best football player in the history of the school. There were a lot of votes for Mike Singletary, who went on to a Hall of Fame career with the Chicago Bears. Who could forget those wild eyes staring down the quarterback? For my money though, RG3 is the best to ever wear the green and gold.

Four games into the season, he had more touchdown passes than incompletions. Think about that for a minute.

In 109 seasons, Baylor had a total of five games in which they gained over 600 yards.

They had six this season!

I think the Heisman is a two man race between Griffin and Andrew Luck of Stanford. Looking at the stats of the two players, Griffin has a slight edge in the passing game, but where he really stands out is in his running game. He runs circles around Luck.

I don't think it would be close if RG3 played for a top football program. Playing in Waco kept him under the radar for much of the season, while Andrew Luck was all the rage for most of the season.

I know who I would rather have on my team!

Good luck Mr. Griffin. I hope you win, you deserve it!
Posted by Lucki Duck at 7:39 PM