Pai Gow With A Twist 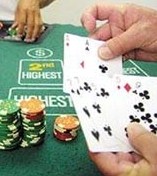 We had seven runners at J-Dawg's Poker Extravaganza Tuesday night, eager to pitch a few cards. After consuming several slices of pizza, we were off and running.

From left to right on your radio dial were Ollie the Accountant, Bobby Dee, Cell, Farmer Harry, J-Dawg, Stamps, and yours truly.

Bobby Dee won the High Hand Jackpot in this $20 buy-in, dealers choice limit game, with quad 9's, netting him a $15 pot. I had a good night, getting more than my share of playable hands. Even better, I was connecting with the board and having my hands hold up. Amazing!

I introduced a new game to the table a few weeks ago and it has turned out to be pretty popular. It's played like Pai Gow, but the twist is that you are playing against each other, not just the dealer.

It's a lot of fun! Try it at your next game and let me know what you think.