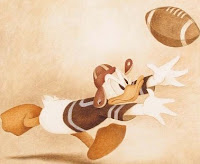 It's time for your picks for Week 5 of the Small Potatoes NFL Picks Contest (Part Duex). E mail your pick to nfl.picks@ymail.com.