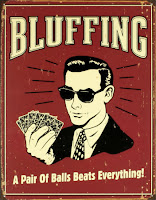 We had a full table at Tin Man's $5 NLHE Tourney. The highlight of the tournament was Bluffin' Bev actually pulling off a huge bluff against Flyboy! She pushed the turn for 8BB with only ace high, then showed the bluff when Flyboy mucked. The whole table let out a collective OOOOOHHH!

I guess Bev's table image has changed a bit.

We got down to the money with myself, Lil' Okie Annie, and Music Man left standing. Music Man pushed for 5BB with A-9 and I had an easy call with J-J. The flop brought another J, but the turn gave MM a gut shot straight draw. The way I've run lately, I was surprised when he didn't hit it on the river.

With the blinds so high, Lil' Okie Annie and I chopped the first place money, rather than playing bingo for the whole thing.

The cash game started out bad for me. I re-bought four times before gaining traction. My last re-buy was the result of a failed semi-bluff. There were two limpers in front of me as I checked my big blind with 5-2 of hearts. The flop had two hearts and a duece, but I checked, hoping to see a free card. Philly Phanatic bet 30 cents, which was half the pot. Rick folded and I called. The turn was a blank, but I thought I could probably push Philly off his hand, which I figured was second pair. I pushed for $1.50, which was a little larger than the pot. Philly hemmed and hawed, but finally made the call, tabling second pair with a lousy kicker.

I whiffed the river and Philly took down a nice pot, most of it mine. Someone commented on the call and Philly said, "I know he bluffs a lot, so I thought I'd see what he had."

I guess I need to take a note from Bev and work on my table image.

I got on a bit of a rush later in the evening and ended up with a $1 profit. WHEEEE!

Good times with good friends. Hard to think of a better way to spend an evening.