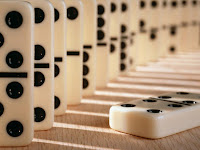 I was asked to play dominos with a group from church a couple months ago. "Forty-Two" was the game, one I had never played before. I was given a crash course by a friend, and I was on my way. The group meets once a month, so gaining experience is slow. I was invited to their latest get together Saturday night, and they were looking for one more player.

"Do you know anyone who can play?"

That was a true statement, but she hadn't played in about 40 years. I hoped she would remember how the game was played after so long. It was cool having her there, she'll be 82 next month and I'm 53. In all those years, we have never played 42 together.

The way the game is set up, you change partners after each game. We were partners for one game, and we won! But, we also were opponents in a game.

I was a big winner at J-Dawg's Poker Extravaganza last Thursday, walking away with an extra $33 in my bankroll. We only had 6 players, so we were able to play some games we usually are unable to play. Five card draw, Seven card stud, Mexican Sweat, Razz, Badugi, we played 'em all and had a great time! Except for Farmer Harry and Glass Man, who both had a couple of re-buys. J-Dawg won the High Hand Jackpot with a 6 high diamond straight flush playing Omaha.

I also won a little scratch at Tin Man's $5 NLHE Tournament this week, min-cashing the tourney when I ran my K-8 offsuit into Debbie's A-Q. I didn't improve and finished third. Debbie and Tin Man chopped the first place money.

I was up and down in the $2 buy-in cash game, finishing with a $5 profit. Debbie also won quite a bit in the cash game, as did Philly Phanatic. Big Daddy kept getting second in the hands he played and took a pretty good hit for the night. I'm sure he was glad it was just a $2 game!

It was a fun week of dominos and poker, but today was "Honey-Do" day around my house. Time to pay the piper I guess :o)

Till next time, win the flips.
Posted by Lucki Duck at 7:02 PM