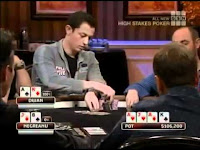 High Stakes Poker is returning for a seventh season later this month. Their big news is that Gabe Kaplan will be replaced by Norm McDonald as announcer.

I don't really care who's giving me the play-by-play on the show. I liked Kaplan okay, and I also enjoy McDonald's dry wit. As far as poker knowledge, I would have to give the nod to Kaplan.

But I watch the show because of the players. Who can forget Dwan betting over a quarter million dollars on the river with 9 high and Phil Ivey seriously considering calling with a lowly pair on sixes. Wow! That was entertaining TV.

We'll have to enjoy the memories of both of those players on the show. PokerStars is the main sponsor and both Dwan and Ivey are Full Tilt guys. So goodbye to them and also Gus Hansen and Eli Elezra.

I don't know about you, but I'm less likely to watch the show without those players seated at the table. Dwan is a fascinating player to watch and Ivey, Hansen, and Elezra are all interesting players that are very creative in the ways they play their hands. They will all be missed. PokerStars may have a smaller audience tuning in because of this, regardless who's sitting behing the microphone. It seems like they would want the biggest bang for their buck that they could get.

First episode is February 26th on GSN. We'll find out then.

Till next time, win the flips.
Posted by Lucki Duck at 9:34 AM