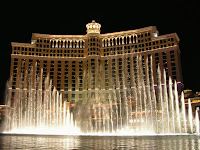 Did you hear that the man who pulled the Bellagio caper last December has been arrested?  Anthony Carleo, 29 and son of a municipal judge, was busted Wednesday while trying to sell his $25K chips to undercover officers. Mr. Carleo has been charged with use of a deadly weapon while commiting a robbery and also trafficking a controled substance.

It appears Corleo literaly has the balls of a burgler, but was unable to cash in his bounty without getting caught. You may remember the Bellagio announcing that they were discontinuing use of the $25k chip and all of them must be cashed in by April, hoping to flush out the robber. Looks like Carleo's hand was forced and he walked right into the trap.

Gotta love it when a plan comes together.