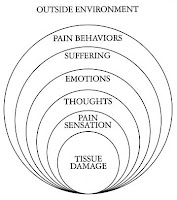 Runnin' bad, variance, downswing, whatever you call it, it ain't no fun. If you've been following my goal chart on the right side of the screen, you've noticed I topped out at 10% last week. Since then, it's gone 9%, 8%, and now 6%.

Last night was no exception. At the WBCOOP, my first three starting hands were A-T, A-A, and A-K. Because of my awesome poker skills, I turned my $3000T starting stack into... $2900T.

The A-T and A-K both wiffed on the flop. I c-bet and was called on one and raised on the other. The A-A was a winner, but just a minimum amount. My final hand was running A-K into A-A. The villain was raising light from late position and I thought I finally had a chance to step on his toes. He raised 4X from the cutoff and I pushed for 14BB from the SB. Of course, he insta-calls with the nuts, but that's the way it goes when you're runnin' bad.

Later last night, the 18 man tourney I was playing was down to three players. I pushed my K-Q soooted into A-K for 5BB. What are the odds of running into that big of a hand at a three player table? Pretty high when the poker gods turn on ya'!

OK, I've vented and feel better now. Time to take a look at some hand histories to be sure it's truly variance and not a leak that is causing this blood letting.

Till next time, win the flips.
Posted by Lucki Duck at 1:08 PM