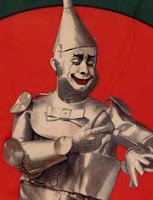 We had eight runners plunk down $5 each for Tin Man's NLHE Tourney last Friday. Jaime and Chas missed again this week and we figured it was because they probably lost their bankroll at the casino last week. I hope we're wrong.

I was unusually active early in the tournament, but I kept picking up good starting hands. I won a nice pot off of Bluffin' Bev early, but lost most of it to Philly Fanatic a few hands later. I busted in fifth when I  missed the flop and tried a stop and go against Bev with 6BB left. Unfortunately, she hit top pair and called.

The $2 cash game was pretty wild. I couldn't get any traction and had to re-buy three times. I finally won a few hands, buiding my stack above the $8 level when I was dealt pocket eights. The flop brought another snowman and I bet 1/2 pot. Bluffin' Bev was my only caller. The turn paired the board, giving me a full house. I bet out again and Bev stayed with me. The river was harmless and I pushed for my last $4. Bev hemmed and hawed, but finally called with her two pair and I pulled a nice pot.

I stayed around the $15 level when I got into another large pot, this time with Tin Man. I limped from UTG with T-9 offsuit. Philly and Tin Man both called. The flop of T-9-7 hit me hard and I bet 2/3 pot. I figured I would either get called by a straight draw or maybe top pair, but I had to re-think the hand when Tin Man pushed for his last $3.

Could he have a set? Tin Man usually plays his middle pairs strong, raising 4-5X the BB. He had limped, so I didn't really think he had a pocket pair. That left the J-8 and 8-6 for the flopped straight as the only hands that I was behind. Hitting the perfect flop for your hand doesn't happen too often, so I made the call and was thrilled to see him table T-7 for top and bottom pair, leaving him a two outer. WHEEE! Big pot coming my way!

Till next time, win the flips!
Posted by Lucki Duck at 3:34 PM