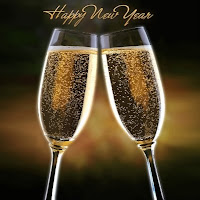 I brought in 2011 at Tin Man's $5 NLHE Tournament last night. We had a nice spread of munchies. I brought a couple of pizzas, Debbie came with sandwiches, Big Daddy showed up with chips and dips, Philly Phanatic made brownies and also brought drinks and hosts Tin Man and Lil' Annie Okie provided snackfood and a bottle of champange.

The tourney went well. We had 12 runners, with the top three getting paid. We were on the bubble with two big stacks (Rudy and Music Man) and two shorties (Chas and me). Chas had been the chip leader for most of the final table, but lost most of her stack on an interesting hand.

Tin Man pushed from UTG for five BB, Debbie called, Music Man reraised all-in, Chas called, and Debbie called, putting her all-in. Chas had everyone covered. I couldn't wait to see what everyone turned over, there had to be some huge hands for this much action!

Here's what was tabled;

Yep, Chas called an all-in, a call, and a reraise all-in with K-2 soooted!

Wrong, the aces held! Tin Man and Deb were felted, and Chas was now the short stack.

She didn't die easily, winning three consecutive all-in bets, but I finally knocked her out when I rivered three of a kind. After that, I went on a rush and ended up chopping first place with Music Man.

I also picked up another $5 in the cash game, winning a nice pot on the final hand of the night and of the year. Gotta love going out a winner!

As midnight approached, we opened the bubbly and I poured glasses for everyone. When the clock struck twelve, we toasted the new year. Tin Man and wife Lil' Annie Okie kissed and then Tin Man laid one on me!

Luckily it was on the cheek!

With a start like that, it's gonna be an interesting year.

Happy New Year everyone!
Posted by Lucki Duck at 7:34 PM