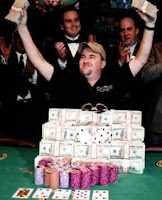 Did you see where Chris Moneymaker is in the top ten after day 1B of the Pokerstars Caribbean Adventure Main Event in the Bahamas?

The $10K buy-in event began with over 1,500 runners, creating a top prize of $2.3 million. Going into day 2 today there were 645 players left, including Moneymaker, who was sitting in sixth with over 217K chips.

As you probably know, Moneymaker won the WSOP Main Event a few years ago, but has pretty much disappeared since. He is credited with creating the poker boom of the '90s with his win over Sam Farha, but I think his victory is only part of the reason for the rapid expansion of poker.

The "pocket cam," created for the World Poker Tour is just as important (if not more so) for the popularity of the game we love to play. Have you tried to watch some of the ESPN replays of the WSOP Main Event from the late '80s and early 90's? Without the pocket cam, it is B-O-R-I-N-G! Almost as exciting as watching paint dry.

If the ability to see the player's hole cards had not come along, no one would have seen Moneymaker's run to the championship. And poker would not be nearly as popular as it is today.

That being said, I hope Chris Moneymaker makes a deep run in this tourney, maybe even a final table. He seems to be a good guy and it would be nice to see him get the monkey off his back.

I played three sets of four games on Full Tilt tonight. I bricked the first two sets at the $6 level (18 man) for a $52 loss. I had been dabbling at the $11 level the last few weeks, so I decided to play my last set of 18 man tourneys at that level. I managed two firsts and a third in the four tournaments, which turned an ugly night into a big winner.