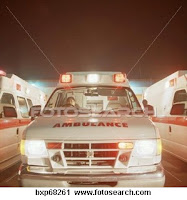 After getting home from Vegas late Friday night, I was awakened early Saturday morning by a phone call from my sister. Her 17 year old daughter was spending the night with our mother and heard her fall in the bathroom. When she went to see what happened, she found Mom unconscious and laying in a pool of blood. Being a quick thinker, she immediately called 911 and 30 minutes later we were all meeting at the local hospital emergency room.

After a battery of tests, it was determined that she had some internal bleeding (duh!), probably caused by diverticulitis. Shortly thereafter she was sent up to the ICU where she spent the next 2 1/2 days.

She was given two units of blood to get her numbers up to an acceptable level, and then a third the next day. She was stable enough Monday morning to run some more tests.

The tests revealed a stomach ulcer (whew!) and she was put on medication and sent home Tuesday.

As you can imagine, it has been a stressful week for our family. Between working and making visits to the hospital, I am one whipped pup, but a thankful one!


I know some of you were upset over the Very Josie Tournament being rescheduled, but it was great for me, because I wouldn't have been able to play last week and it was a nice stress reliever to be able to pitch some cards with some of my favorite bloggers.

Waffles was there, and as a fellow jogger, I have enjoyed following his effort to get into running shape. Big ups for Waffles!

Also present were lightning and Wolfman, both who are great reads, as well as Hurricane Mikey, MemphisMOJO, and of course Josie.

I felted Josie at the final table when she open shoved pocket sevens and ran into my QQ. I must have been running good, because she didn't give me any grief over it!

Shortly after getting ITM, Ratdee click raised at the $200-400 level from the small blind. I had KQ and felt like he was either stealing or had a so-so hand, maybe a small pocket pair or a baby ace. MemphisMOJO had a big chip lead over both rat and I, and I wasn't playing for second, so I shoved for 9BB, hoping the villian would fold, and if he didn't, I was willing to race a pocket pair for the pot. Even if I was a little behind ace rag, I was willing to gamble in order to win the tourney.

Alas, rat did have a small pocket pair... pocket ones, but in the bizarro world of Full Tilt, I felt like I would probably suck out. I hit my king on the flop, but amazingly, didn't improve and finished in third.

Another fun night at the Very Josie, plus a little coin! Thanks VJ!

Thanks for stopping by. Happy trails!
Posted by Lucki Duck at 9:09 AM