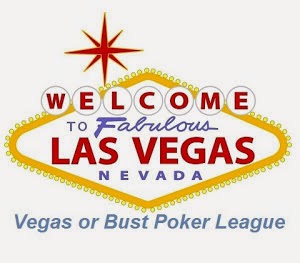 Our third of twelve league tournaments was held last Friday. We had a full table, with two seats to next summer's WSOP in Vegas at stake.

Big Daddy had fallen asleep and showed up late to the party, but still managed to go out first. Philly Phanatic followed shortly after that, then Bobby Dee fell on his sword.

Ollie was next to go, then we played through several blind levels before Stamps went busto.

With blind levels reaching critical mass, Lil' Annie Okie went out in fifth. Surprisingly, the final four players traded chips a long time before I received a 4th place toe-tag when my two pair ran into a set.

I hate when that happens. :)

Tin Man captured third then J-Dawg and Ranger Rick played heads up for almost an hour before Rick took down the win.

At the 1/4 mark of the season, things are still jumbled up pretty good, but at least I'm at the top of the jumble, so that's a good thing. Hopefully I can continue to finish near the top each month and make another trip to the Rio!

Till next time, win the flips.
Posted by Lucki Duck at 9:26 AM