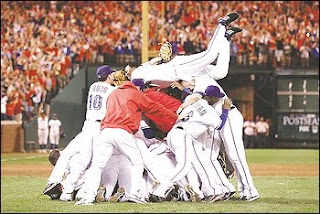 I played my first live poker in almost two weeks last night at Tin Man's $5 NLHE Tournament. I have to admit, I was going through withdrawal!

We had 11 runners for the tourney and I got off to a good start, winning quite a few small pots early and was able to coast until we got down to four players. Sonny Boy was short-stacked and open-pushed from the small blind for 2 BB. I peeked at my cards and called with my A-7 offsuit. Sonny Boy tabled 8-4 offsuit and caught some flack from the other players, but I was okay with the move. He needed the blinds to stay alive, and unless I had a good hand, I couldn't call. The flop paired his four and I didn't improve, giving him the double-up and putting me on the morphine drip.

I open shoved for 3 BB two hands later with A-2 and was called by Jamie's K-9. The flop brought a 9 and I cashed in third place for $10. James and Jaime chopped the remaining tournament money.

As has been the case at Tin Man's the last few weeks, I was absolutely
card dead in the cash game. The only hand I won was an open raise for 3 1/2 X the BB with pocket queens and it was folded around. That NEVER happens and I only won the blinds. I did split one pot with Bluffing Bev with the nut straight, but ended up dropping $6 before heading home with a $1 net loss.

None of us were focusing on poker as we should, because the ALCS was on in the background. The Rangers are my second favorite team (behind the Astros), and I was excited that they had a chance to go to the World Series for the first time.

Add to that the fact they were playing the Yankees (AKA, The Evil Empire) just made it that much sweeter when A-Rod took strike three for the final out. If you combine A-Rod's and Sabbathia's salary, it's more than the entire Rangers roster. And they got their asses handed to them. Gotta love it!

My online game is going okay. I decided to play a $3-90 man KO tourney. I usually don't play these, mainly because I don't like part of the equity going towards knockouts, but it was a deep stack tournament, so I invested my $3.30.

I was able to double up my starting $3000 stack quickly and chipped up through the first hour, sitting in the top 15 for most of the time. My first hand after the break was A-K and I open raised 3X the BB. The button, who was slightly shorter, shoved and tabled A-3 SOOOTED. Of course I called, but he rivered a flush, knocking me down to less than 1 BB.

I got decent hands the next three times, shoving all three. I doubled up twice and tripled up once and was suddenly almost back to where I was before my bad beat. I was able to chip up and then knock a couple of players out and made it to the final table with an average stack.

Scanning the final table to see if there were any players I recognized, I saw none other than Very Josie sitting across from me! She was one of the shorter stacks, but soon doubled up when her soooted ace completed a flush on the river. Her villian had called with a bigger ace and went totally friggin bat crazy nuts when he lost the hand. It was pretty funny and VJ handled it well by just ignoring him.

We got down to three players, with Josie and I filling two of the chairs. I had the lead when we got three handed and was excited to see A-J and open shoved for 8BB. Josie folded, but the villian called. I felt like I would probably be ahead of a lot of his range, but he tabled pocket kings.

I didn't improve and now I was the shorty. The very next hand I open shoved from the SB, trying to steal Josie's blind. She was in second and I knew she would need a big hand to call. Unfortunately, she had such a hand, flipping over Q-Q. My 6-4 soooted was no match, and just like that, I went from chip leader to out of the tourney in two hands. But when you're three handed and run into pocket kings and pocket queens in consecutive hands, it's not your night!

Josie finished second and was disappointed, but a second and a third in a 90 man tourney represents a good showing for us poker bloggers!

Good luck to everyone in the Sunday tournaments!