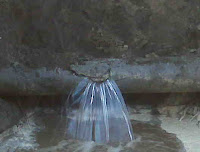 We had chicken fajitas at J-Dawg's Poker Extravaganza Thursday night. Larry the Mailman grilled 'em and they were mighty tasty!

We only had eight players and I was lucky enough to draw a seat where I could watch my Nebraska Huskers whup up on K-State while we played.

Ollie the Accountant was the big winner, cashing for $47, better than doubling the $20 buy-in. Bobby Dee won the high-hand jackpot with quad aces. Ollie had a grip on it with quad tens, but it didn't hold for him.

I finished with a $1.25 loss for the evening. I'm pretty sure my bankroll can take the hit :)

We had 13 show for Tin Man's $5 NLHE Tourney on Friday. I was extrememly short stacked with four left (the tourney pays three places), and figured I was going to be the "Bubble Boy'" but Bluffing Bev and Jamie played a big pot, with Bev busting on the hand. Jaime raised my BB on the next hand and I was all in when I called for two more BB with K-3 offsuit. Jamie tabled A-5 and paired his ace on the river. Third paid $10, so I doubled my money in the tourney.

The cash game was well under way when I joined in. "Horseshoe" Ron already had increased his $2 buy-in to around $15 and the game was once again, wild and wooly! I was able to get my stack up to almost $5 when I doubled up with pocket queens.

Ron was being a bully with his big stack. I was seated two to his left and was getting tired of watching him raise every hand. When called, he would usually turn over a crap hand, but draw out to win another big pot. He was up to $25 when I finally got a decent hand. Ron raised to $1.00 (5X BB) from the button, without looking at his cards. I looked down at A-J offsuit, not the best hand in the world,, but certainly ahead of a random hand. I pushed for my last $4.80 and Ron called with "Doyle," T-2 offsuit. And like Doyle, he flopped two pair. I paired my J on the river, but it was too little, too late. I called it a night after losing 3 buy-ins for a net $1 loss.

I also requested a pillow for Ron, stating that he was "probably uncomfortable sitting with a horseshoe up his ass!" Thus a nickname was born.

Online poker has been rough. After a record August, September wasn't as profitable, but I did manage to win a little scratch for the month. October, however, has been awful. I'm down $250 from my record high bankroll on Full Tilt. At the $6.50 buy-in level, that's almost a 40 buy-in downswing.

Obviously, I've developed some leaks in my game. Time to look at some hand histories and figure out what I'm doing wrong. Boring stuff, but it's gotta be done.

I hope my next update is a little more "upbeat"! Until then...