After a $250 downswing in my Full Tilt bankroll, I finally made it all back, plus a little!

After placing third in a $3- 90 man tourney Saturday, I decided to play a $6- 90 man Sunday and finished a respectable fifth, going out when my pocket sixs lost a race to K-Q offsuit. Fifth paid about $50. Since I was running good in the 90 mans, I decided to try it again yesterday.

I lost when my top two pair were outdrawn by an OESD that hit on the river. I don't think gambling your stack on a draw that early in a tourney is +EV, but with the knockout bounty considered, I could be wrong. It certainly worked out for the villain in this instance!

I also played a total of nine $6- 18 man tournaments, winning one and placing second in three for a net win of over $75 for the evening, putting my FT bankroll at a record high. SAH-WEET! 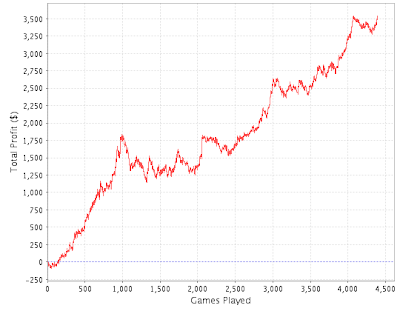 Hopefully, the hot streak I've been waiting on has arrived!