After mowing the acre of grass nestled around my home, I sat in front of the TV with my laptop and fired up a $3.30 Triple Up tournament on Bovada. It turned out to be a weird one.

I only connected on one flop, with both pocket pairs falling victim to over cards, followed by big bets on the flop. After all the early action I had 1470 chips.

A lot of excitement for 30 chips.

The starting nine players hung around quite a while, and when we hit the 75-150 blind levels, there were still seven left, one dominating stack to my right, and several of us with around 1,700 chips.

I open pushed from the small blind with T-9 and got caught when the BB woke up with A-J and called. I didn't improve and found myself down to 261 chips, less than 2 BB. Not good.

The very next hand was A-K soooted. I pushed and received three callers. An ace on the river won the hand and I was back in business with over 1000 chips.

Blinds increased to 100-200 on the next hand and my heater continued. My next three hands were A-J, Q-Q, and A-K. I pushed all three hands to no callers and chipped up to almost 2000.

The big stack lost a couple big hands and was knocked out when he lost a third and we were down to six players, three large stacks and three small.

The shorties kept winning their all in bets and hung around until the 200-400 level. Things ended quickly at that level and although I wasn't involved in any of the important hands, I was able to finish second in total chips and book win 18. 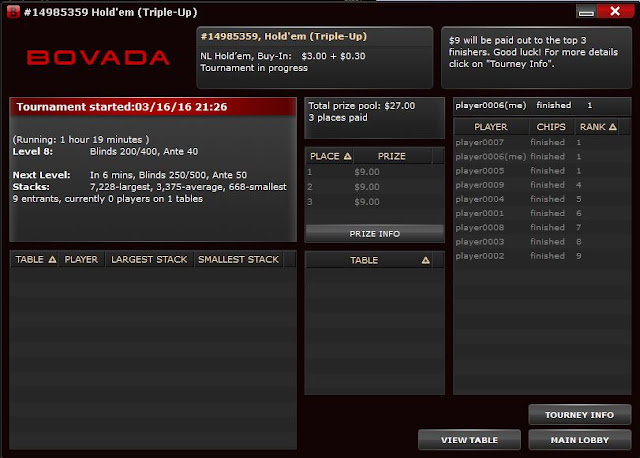