I finally had a little time Sunday night and fired up a $3.30 Triple Up tournament on Bovada.

The most interesting hand of the tournament happened very early. In only the second or third hand, I peeked down at pocket queens from the big blind. A 3X raise from the cut off was welcomed with a four bet from yours truly. My opponent called and we looked at a Q-3-4 rainbow flop.

I placed a 1/2 pot bet and received a quick call. I fired again on the turn, this time betting around 1/3 pot. I didn't want my fish to spit the hook.

The river was a brick and I thought my best move might be to check and hope the villain would bet. I was hoping he was sitting on pocket aces or kings. Even if he had something as weak as A-K or jacks, I thought he might take a stab at it.

I wasn't disappointed, but I was curious at his bet sizing. We both had started the hand with our original 1,500 chips, and he bet all but 80 of his on the river. Even more interesting was his fold when I pushed for the additional 80 chips.

I guess the pot odds weren't good enough to call :)

That hand gave me a nice stack that I was able to build on and I kept the chip lead wire-to-wire to book win #16. 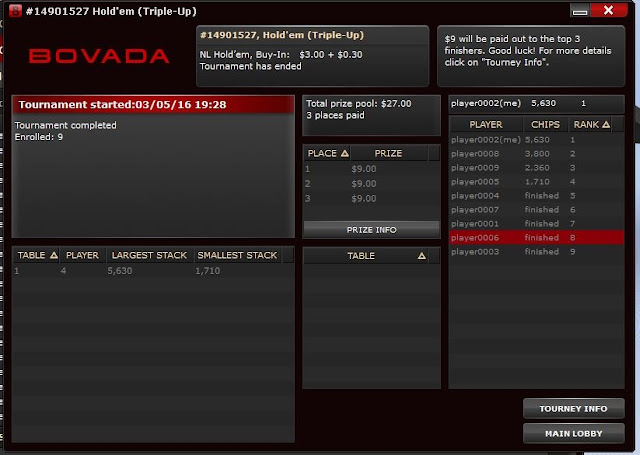