After completing several chores yesterday, I settled in front of my laptop and fired up a $3.30 Triple Up tournament on Bovada.

I played pretty snug in the early rounds, but finally made some hay when I raised from middle position with pocket kings. The action folded to the button, who pushed for 1,000 chips, which was about 20 big blinds.

Of course I called and my opponent tabled 6-6. Neither of us improved and I was sitting on 2,500 chips.

We got down to the bubble (four players) quickly, but it took a while for the final elimination. I was able to stay ahead of the pack for the most part by stealing blinds. I would get three bet occasionally, but my success rate was high enough to build a nice stack.

Blinds were at 150-300 when the final hand occurred. I open-raised to 650 from the button with A-K and the small blind pushed his last 2,200 chips with A-T. Unfortunately for him, this time I had a hand and made the call.

Things improved for the villain when a ten hit on the flop giving him the lead in the hand. The good news for me was that all three cards were diamonds, and I was holding the king of diamonds.

The fourth diamond appeared on the turn, completing my flush and left my opponent drawing dead on the river and knocking him out of the tourney. 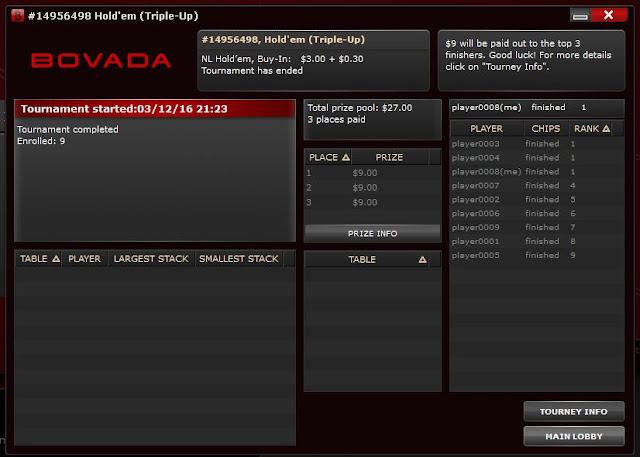