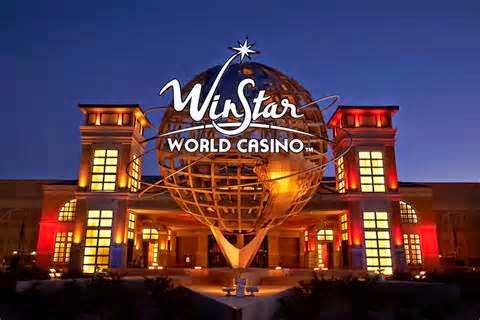 Bobby Dee and I decided to take a road trip to the WinStar Casino just across the state line in Oklahoma. There was a $175 buy-in, no-limit freeze-out tournament we wanted to give a go.

We left Waco at 7am, with a temperature a balmy (for February) 66 degrees. When we stepped out of Bobby's truck three hours later the temp had dropped 20 degrees and was continuing to sink. Brrrr!

I had never been to this property before, and let me tell you, it was impressive. A huge casino, similar in size to the MGM in Vegas. The poker room was top flight, and was buzzing Saturday night.

The first thing I did when we arrived was sign up for a player's card in hopes I might get some special room rate offers in the future. Next, we made the long walk to the poker room to register for the 11am tourney.

There were 175 players at the start, with 18 getting paid. First place paid a little north of $6,500, which is a nice roll-builder. The deep-stack structure was great! Blinds started at $50-100 and lasted 30 minutes. Combined with a $20,000 starting stack and you had the recipe for a fun tournament.

Running into well known poker players in Vegas is not that unusual, especially at WSOP events. The only player of note I have had the pleasure of actually playing against was Phil Ivey in last year's World Series, and that was only for a hand or two before he busted out. Getting an opportunity to play against a Poker Hall of Famer in a casino in Thackerville, Oklahoma had not crossed my mind, but after taking seat seven at my table, I looked to my left and saw TJ Cloutier seated in seat nine. Getting the chance to pitch cards with TJ certainly made my $175 investment worthwhile! And who knows, I might even cash. 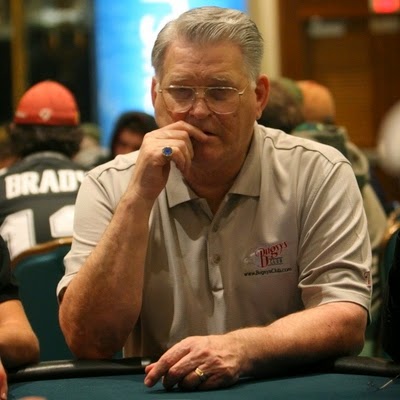 TJ was very friendly to all of us, keeping the table entertained with his stories from both the poker world and his childhood. A couple stories stuck in my mind, the first about some business cards he received from the Poker Hall of Fame. He was supposed to give them out at the WSOP this summer. His title on the card read "Poker Hall of Fame Inductee."

He also spoke about walking to Seals Stadium to sell soda pop at their baseball games when he was a kid.

"It wasn't an easy sale, because it was always so cold in Frisco." "One of the older guys was trying to push cold beer, but couldn't peddle even one because it was chilly."

"Well, the heck with YOU people," the vendor said, "Then I'll have one," sat down and popped one open!"

The whole table got a kick out of the story :)

I started quickly in the tourney, including two hands with TJ. Both times I held A-Q diamonds. In the first hand I turned the nut flush and he folded his A-Q hearts. I pulled a nice pot when my turn and river bets were called by another player with the K high flush. My second hand with TJ was once again A-Q diamonds. This time he got the best of me, hitting a straight on the the river and getting paid off with my TPTK.

I also picked off a big bluff on a 4-4-3-2-2 board with pocket queens. My biggest pot however, was won with what Rob refers to as the "dreaded pocket kings." I was in middle position and open raised 3X the BB, which seemed to be standard in the early portion of the tournament. I was three-bet by the button, who had been fairly active thus far, so I was confident it was likely I was ahead in the hand. I hit my set on a dry flop and just check-called. I rinsed and repeated the turn, but missed a bet when my opponent checked behind me on the river and tabled his pocket aces. At the first break (two hours in), I had built my stack up to a healthy $46K and was liking my chances.

I won a few small pots in the next couple hours, but lost almost half my stack on a bad beat. I raised 3X from UTG with pocket jacks and got three-bet by the button when he pushed all-in for $23K.

My opponent hadn't gotten out of line thus far, so I knew he had something, so it was a tough decision. I made the call and was please to see my opponent table T-T. The flop was harmless, but the turn was another T and just like that, I was below $25K.

I didn't get many hands worth playing in the next hour, and when I did, I was whiffing the flop. And I mean whiffing, as in no hand and no draws. At the second break I was sitting at $29K, but the blinds and antes were getting serious. There were 74 players left.

We had a table change when we returned from our break and after four hours, my poker playing with TJ was over. I open pushed two hands, A-T and Q-Q, picking up the antes and blinds, and a limper or two. I also pulled in a decent pot when the UTG player open raised 3.5X the BB and was called by one player. I pushed my K-K and both villains folded.

I open-pushed my final hand from the cutoff with 9-9 and got called by the big stack at the table with his J-J. Unlike my pocket jacks, his held up and I went busto in 67th place.

We then walked over to a New York themed burger joint and swapped stories over a couple of cheeseburgers and greasy fries. Good stuff!

I'll write a separate post on the cash game. I don't want this go on so long that it rivals one of Rob's missives :)