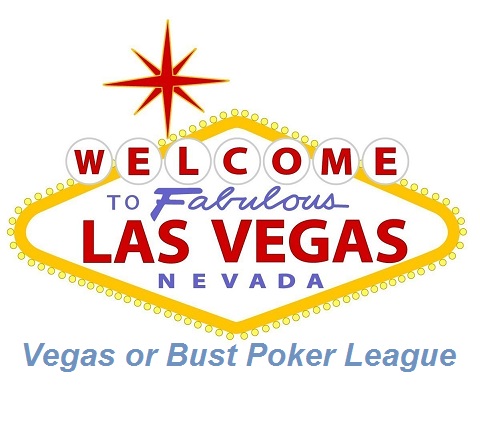 We had a full table of 10 at last Friday's Vegas or Bust Poker League tournament. This was the tenth of 12 league tourneys. At stake are two seats to the 2015 WSOP this summer at the Rio in Las Vegas.

Coming into the tournament there were three of us that had started to pull away from the rest of the players. With only two prizes available, my main goal was to finish ahead of both Ranger Rick and Tin Man, who were my main menaces.

Rick tore his britches (southern expression) early when he ran his pocket aces into Big Daddy's flopped set of kings and was the first out. This pretty much seals his fate for this season.

Philly Phanatic was next to go when he pushed with top pair and I called with top pair (better kicker) plus a flush draw. I didn't hit my flush, but didn't need too. I guess that would be considered showing off.

Big Daddy fell on his sword in eighth, followed by Tin Man in seventh, so I had reached my goal. Now the only question was how much daylight I could put between us.

As it turned out, it wasn't much. Lil' Annie Okie dropped out in sixth and I was next to go with a fifth-place finish.

Ollie the Accountant got toe-tagged in fourth, followed by Bobby Dee in third.

Stamps won a short heads-up battle with J-Dawg to win his second tourney in the last three and pushing his way into the running.

With only two tournaments left, I am in a pretty good position to win another seat. I'll need to finish in the middle of the pack in both tournaments to wrap it up, but one bad move could mess everything up.

Hopefully I can hang on and see a few of you in the desert this summer :)

Till next time, win the flips.
Posted by Lucki Duck at 2:16 PM