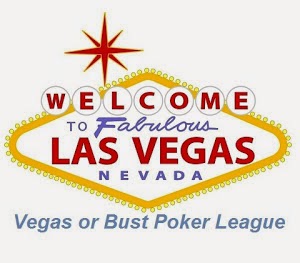 We completed our seventh of 12 league tournaments last Friday at Tin Man's home. At stake is two seats to the 2015 WSOP at the Rio in Las Vegas.

I had a third place finish last month, but the previous two hadn't been too kind to me.

In the August tourney I open-raised from the cut off with a medium-strength hand and was called by Tin Man, who was the BB.

Tin Man put out a small feeler bet on a T-5-A rainbow board. His betting pattern is pretty reliable, so I put him on middle pair and raised him. I was surprised when he called, but shot another bullet on the turn when a blank hit. Tin Man check-called. The river was another blank and after he checked, I shoved the remainder of my chips, putting maximum pressure on him.

To my dismay, he said, "I guess I'm gonna have to double you up buddy. I call."

I turned over my king high hand and Tin Man showed me the second pair hand I had put him on.

"Lil' Annie Okie (his wife) told me I needed to stick with my hands longer," he said as I headed for the rail with a ninth-place finish.

I finished eighth in the September tournament, but it was just a case of being card dead for two hours. I finally shoved for 7 BB with A-J and ran into Big Daddy's A-Q. Buh-bye.

Obviously, I needed a strong finish to remain in the thick of things and was fortunate to get it.

Bobby Dee was the first to go when his A-K got run down by Ollie the Accountant's Q-J. J-Dawg was next to fall, playing very few hands and finally made a stand with pocket sevens. Ranger Rick called with A-J and paired his ace on the flop and then hit a third one on the river just to show off.

Annie finished eight and Big Daddy seventh. Blinds were getting big ($200-400) with only $15K in chips on the table, so the shoves became commonplace.

Stamps fell on his sword in sixth, and Ollie was toe-tagged in fifth. Tin Man busted in fourth shortly thereafter.

Once we were three-handed, the chips seemed to make a circle around the table as we traded jabs. I finally felted Rick when my A-9 held up over his A-7 shove.

A-7 ended up being a big hand for me on this night as I shoved with it against Philly Fanatic when we were heads-up. Philly quickly called with A-J and I knew I was in trouble.

I had him covered, but only by a few chips, so this one was for the tournament. A seven on the flop turned the tables and the final nail came on the turn when another one showed its face.

Hey, it's better to be lucky than good! Righr?

I was pleased to take this one down. The win puts me in position to make a run at my third consecutive title.

Till next time, win the flips.
Posted by Lucki Duck at 9:28 AM