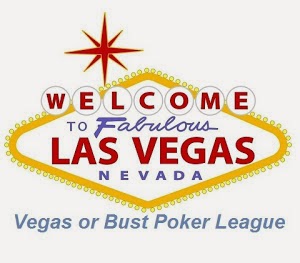 Our Vegas or Bust Poker League met last Friday for the eleventh of twelve league tournaments. At stake are two seats to this summer's WSOP and an all expenses paid trip to Vegas for our top two finishers.

I was fortunate to win first place in our league last year and parlayed that into a WSOP cash, which you can read about here.

I was solidly in second place this year and could wrap up my seat with a high finish last Friday. Philly Phanatic was closest to me in the standings, followed by Ranger Rick. My primary goal was to keep both at bay and in a perfect world, put enough distance between us to clinch second place.

Things didn't start well, as Philly doubled up early with aces full of jacks, out-boating Big Daddy's jacks full of aces. I was able to build my stack steadily at the early levels, but tried to avoid any big pots. The one thing I couldn't afford was busting early.

Big Daddy busted first, followed by Rick, which was very good for me. Now Philly was my only concern.

League leader Lil' Annie Okie and Philly were both felted on the same hand when Tin Man boated on the river. Philly frittered away his big stack by playing too many hands out of position, but it put me in a great position to add a little daylight between myself and third place.

Dealer Larry and Bobby Dee were next to fall on their swords, both at the hands of Tin Man, who acted as executioner for over half of the table.

J-Dawg was next, followed by Stamps.

Tin Man and I were now heads-up, but he had a 4-1 chip advantage. I was able to win a hand or two, but busted when my Q-7 hit middle pair on the flop and I pushed. Tin Man had paired his king and I was unable to improve, so it was adios Duck.

Although I would have loved to win the tournament, my second place finish garnered me enough points to move into first place, but more importantly, to clinch no worse than second place in the league.

April is our final tournament and my main objective will be to win first place in the league again. Going into it I have a 1 point lead over Annie, who has also wrapped up a seat. Click here for the latest standings.

Till next time, win the flips.
Posted by Lucki Duck at 6:25 PM