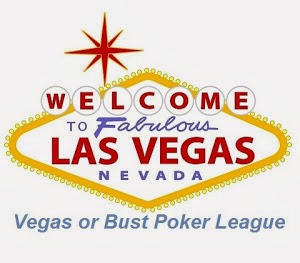 It's been a couple months since I've given an update on our little poker league. Since there's nothing worth betting in the sports world for the second consecutive day, I thought this would be a good opportunity to bring you up to speed.

Currently I'm positioned in third place, still in striking distance of winning one of the two WSOP trips to Las Vegas. In our October monthly tournament I made a couple of errors and finished a disappointing fifth out of 10 players. My biggest mistake was allowing the blinds to catch up with me and I lost my fold equity. I was ahead of two of the other players and tried to outlast them to move up a couple positions and win a few extra points. Unfortunately it backfired on me as they kept winning their all-in hands.

Last month I felt like I played well, but when the blinds started getting big I went card dead. Bad timing. I did manage to hang around long enough to pull off a fourth place finish.

Our league has 12 monthly tourneys and we have completed seven. Our December tournament is this Friday, so I'll be hoping to close the gap on Philly Phanatic and Lil' Annie Okie. I think Annie probably has one of the spots wrapped up unless she messes up badly during the last five tournaments. Philly is another matter. He plays aggressively and gets caught from time to time, as he did in the November game. If he goes out early again, that will open the door for me. We'll see.

This is our second year to have our league and it has really been a lot of fun. Of course, I won one of the Vegas trips in the first one, so my view may be skewed. However, we generally play for very small stakes (small potatoes), and I think our league players enjoy playing for a sizable prize once a month.

I'll be plugging away at the table Friday and will do a write up sometime next week. You can CLICK HERE for the latest standings if you're so inclined.