Phil Ivey A No Show Again! 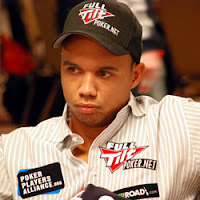 We had 10 runners show at J-Dawg's Poker Extravaganza Wednesday night. Burgers and chips were on the menu, plus a couple of desserts from which to choose and we were ready to pitch some cards.

Phil Ivey didn't show. I have to assume it's in protest to the poor way Full Tilt is handling player refunds. I could be wrong.

Riverboat J had a tough go of it again this week. As I have written before, Riverboat is one of the top players at the table, so as bad as the suckouts against him were, he still walked away with only a $9 loss. Ray-Ray and Beer Bottle were hit the hardest, losing $30 and $28 respectively.

Stamps cashed out with a $32 profit, with Farmer Harry and Gentleman Jim both finished the evening with $20 profits. Dealer Larry and J-Dawg broke even and I came out ahead by $12.

I won the biggest pot of the evening playing Omaha High. We had been playing for over two hours, I hadn't pulled a pot all night and my stack was down to $6. I looked at a nice starting hand of A-K-K-4, with the ace being of the suited variety. I was UTG and raised to $1. Ray-Ray called and Riverboat J three-bet to $1.50. Gentleman Jim, Bobby Dee, J-Dawg and Beer Bottle all called before it got back to me and I four-bet to a bunch of moans and groans from the table. Only J-Dawg folded.

The flop was A-8-7 rainbow, and I bet after Beer Bottle's check. Riverboat J and Beer Bottle were the only ones who called. The turn was a useful 4, giving me two pair. When the hand began, I looked at my four as a throw-away card, but suddenly it had become very important. Riverboat J came along for the ride, but Beer Bottle finally waved the white flag and mucked. The river didn't complete any draws, so I felt pretty good about my hand and bet. Riverboat called and tabled A-K-Q-J for top pair. My two pair won a $14 pot for me and started me on a mini-rush, where I won three of four hands and allowed me to go home a winner.

J-Dawg won the High Hand Jackpot with aces full of threes, but was still an overall loser. He hit the hand early in the evening and surprisingly it held up.

I have a niece graduating high school tomorrow night, so I'll have to miss Tin Man's $5 NLHE Tourney and won't be able to defend my title. The things we do for love :)

Till next time, win the flips.
Posted by Lucki Duck at 9:19 PM