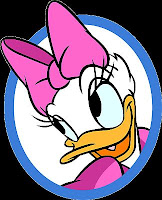 I won a nice pot early from Bev when my pocket jacks flopped a set and rivered a boat, taking 2/3 of her stack. I later felted Music Man, Philly Phanatic, and Bev, but none of them were the bounty. I also came close to knocking Big Daddy out, but he folded to my river bet, leaving him with half a BB.

The tourney paid three places and when Tin Man busted in fourth, it meant that Ms Duck had cashed in a tourney for the first time. A few hands later, Big Daddy was all-in with his 1/2 BB. Ms Duck was the BB and tabled Q-5, which was better than the 8-4 Big Daddy flipped over. The flop brought an eight for Big Daddy, but Ms Duck turned the queen and Big Daddy was toast. He was also the bounty, so Ms Duck took home the $8 bonus.

We were down to heads up play, Mr and Ms Lucki Duck. I don't claim to be a wise man, but 30+ years of marriage told me that a heads up match with the wife was a no win situation for me. Definitely not +EV! So we agreed to chop the top prize and I heard her whisper to Big Daddy, "He's afraid of me."

You got that right sweetie!

Till next time, win the flips.
Posted by Lucki Duck at 2:49 PM