We didn't have a game at J-Dawgs this week, but I did play at Tin Man's $5 tourney. And I played in a tournament at a local bar Saturday night to make up for no poker at J's.

I was the third player out at Tin Man's. I was the BB and with three limpers in front of me, I pushed AJ off for 6BB. "Bondo" Chris called with K9 off and flopped a straight. Bondo didn't take care of my chips and he was KO'd shortly.

Bluffing Bev, Bondo and I started the $2 cash game three handed, but we were joined by Sonny Boy, Tin Man and the Philly Fanatic within the next 15 minutes.

Sonny Boy won a big pot off of Philly early, when his straight flush to the Q beat Philly's ace high flush.

I had a good night at the cash game, cashing out for $23 with only one re-buy.

I won one of the biggest pots of the night, around $10 when Tin Man pushed after the flop for over $4. Tin Man is normally pretty tight, and had raised 3X pre-flop, so I was afraid he had flopped two pair on an AT7 board. The flop had hit me and I had a decision to make with TPTK. I tanked for a minute and finally made the call. Tin Man tabled pocket fours and didn't improve. Yea me!

Tin Man invited me to join him and his wife, Little Annie Okie in a tourney at a local bar. I had played in a league there a couple years ago, but decided I didn't want to commit the time necessary to win the title. But I figured playing one time might be fun.

It was great seeing some of the guys I used to play with and catching up with them. There were 18 in the tournament and I ended up in third. I had forgotten how fast the blind levels rise, doubling every 15 minutes. We started with 500 chips each, and the blinds were 400-800 when I finally busted. I lost when my pocket twos went down to 8-3 off.

I've been running good on the vitual felt lately. I've been 3 tabling for a couple of weeks, starting at the $11-18 man level. The variance was a little too high for my taste, so I dropped back down to the $6 level this week.

So far, including rakeback, I'm up a little over $150 since I started the experiment. That puts my Full Tilt account at another all-time high! 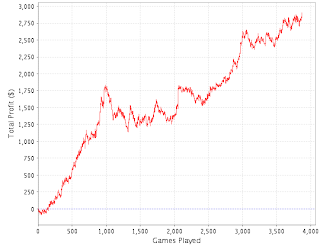 Thanks for stopping by! I hope everyone has a great week.