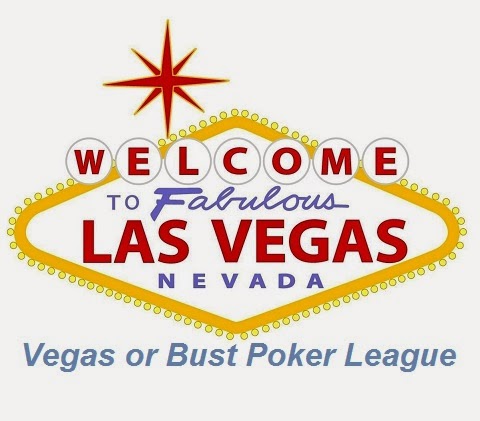 Not as in a one outer, but the stakes were as high as I play and the beat was brutal.

Going into the final tournament of our Vegas or Bust Poker League, I was leading Tin Man by one point and Ranger Rick and Stamps by six. Our league awards WSOP seats (plus airfare and lodging) for the top two players, so all I needed to do was finish no lower than sixth in the tournament and I would secure one of the seats.

My strategy was to play tight early and avoid getting into any big pots. The only way I would put myself in danger would be if I was holding the nuts. Just sit back in my easy chair and let the other player knock each other out.

My $1,500 opening stack was down to ~$1,100 about 45 minutes into the tourney. Blinds were up to $40-$80 and I was on the button. Ollie the Accountant had been eliminated just a few hands before and we were down to nine players.

There were four limpers in front of me and I looked down at pocket jacks. As I noted before, I wasn't interested in getting involved in big pots this early so I played the hand as a small pocket pair and just called.

The flop was J-4-T with two hearts. It checked around to me and I bet $300, figuring it would take down the pot. As expected everyone folded, except for J-Dawg. He hem-hawed for 30 seconds or so and then pushed all-in.

He had me covered, so I knew if I called and lost, I would be out in ninth place and would put my WSOP seat in danger. On the other hand, I had ~$650 chips left, $380 in the pot already, and I was holding the nuts. J-Dawg never bets on draws, so I put him on either two pair or hopefully, a smaller set. I just couldn't bring myself to fold and made the call.

He surprised me by turning over Ah-7h for the nut flush draw. The turn was the 9 of clubs and I only had to dodge one more bullet. The river was a red card, but lucky for me it was a diamond.

J-Dawg asked for a count and started counting his chips that were now mine. "Whew," I thought, "that could have been disastrous."

"Hey, wait a minute!" I heard Stamps holler. "J-Dawg has a straight!"

"What," I said in disbelief as I looked at the board.

The river diamond was an eight, hitting J's gutshot straight draw. I was so focused on hearts that I didn't see the straight. Hell, nobody did.

Talk about a kick right in the nads.  Just brutal. The very thing I didn't want to happen, had. I was out in ninth and had opened the door for both Stamps and Ranger Rick to move past me in the standings.

I won't bore you with the details after that hand, other than to say that Stamps finished in second place in the tournament, which was enough to move him into a second place tie with me for the final seat to the WSOP.

Our league rules state that if there is a tie for second place, the player have two options. They can agree to split the prize money, which is enough for a buy in and most of your lodging, but not enough to cover airfare, or play a heads-up tournament for the entire prize. Stamps and I plan on meeting Tuesday to decide what we want to do.

So, as I write this I'm very disappointed at the way I finished league play. However, I also realize it could have been worse. But... damn.