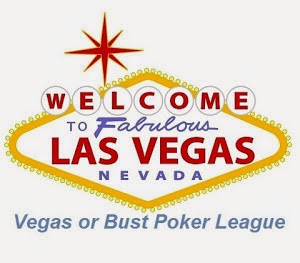 The ten members of the Vegas or Bust Poker League met last Friday for the ninth of 12 league tournaments. At stake is two seats to the 2015 WSOP in Las Vegas.

As happens quite often, Big Daddy was the first to fall on his sword. It was another 45 minutes before Philly busted. I raised 2.5X the BB from under the gun with pocket aces. Philly felt like I had pushed him off a recent hand with napkins (he was right) and three bet all in with pocket tens. Neither of us improved and we were down to eight players.

Bobby Dee continued to run bad, getting his stack in with the best of it, but getting run down by J-Dawg and finishing in eighth. Bobby just can't seem to get a break this season. Tin Man's seventh place finish was his worst of the season and he was followed by J-Dawg.

Ollie dropped out in fourth and I finished third.

The hand that hurt me most was played against Ranger Rick. I open-raised from the SB with A-Q and was called by Rick's K-8. I checked the Q-8-3 rainbow flop, hoping for a C-Bet from the aggressive player I know Rick to be. I wasn't disappointed when he pushed with middle pair. My TPTK shrunk up on the turn when another 8 hit the board, crippling me and shooting Rick to the chip lead.

He made it hold up, eliminating Annie in short order to take the top spot and the ten points that go with it.

With three tournaments left before we wrap up another season, it's basically down to a three man race for two spots. I'm one of the three, so hopefully I'll be able to hang on and cash another ticket to the WSOP this summer.

Till next time, win the flips.
Posted by Lucki Duck at 8:39 AM