Ms. Duck and I took a weekend road trip to the fair city of Tyler, Texas, about a 2 1/2 hour drive east of Waco. Our purpose was to attend a concert by Ray Wylie Hubbard.

Ray is originally from Oklahoma, but he got to Texas as quick as he could. I would describe his music as a folksy country blues. I doubt he's written anything you've heard, with the possible exception of "Up Against the Wall Redneck Mother," which was recorded by Jerry Jeff Walker in the 70s and covered recently by Cracker.

The concert was in a converted movie theater called "Liberty Hall." Liberty was renovated a year ago and sports an art deco motif. The sound is great and makes for a nice venue. Our seats were on the sixth row (pictured below), so we had a great view. 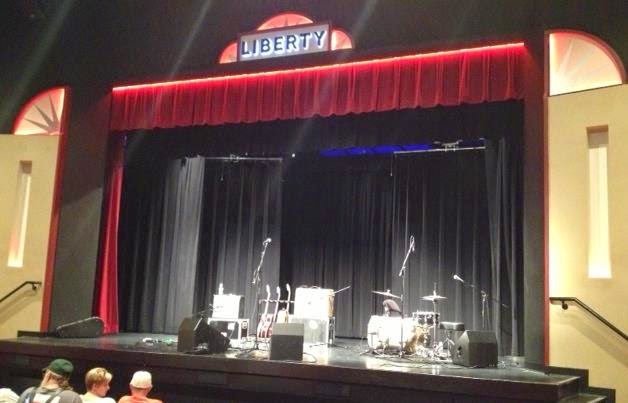 Ray played quite a few of my favorites, including "Mississippi Flush," a song about having your royal lose to the hand in the title. He didn't play "Dust of the Chase," which is another gambling themed ditty that I like.

I think the crowd favorite was titled, "Screw You, We're from Texas," written to a few Nashville record executives that had come to see Ray play down in Port Aransas. Ray explained that all they wanted to hear were covers of the current country top 40 hits.

Ray replied that he didn't know any of those songs. "We write our own song in Texas," he said. And so the song was written during a break between sets, in effect telling Nashville to stick it where the sun don't shine. It also pretty much ended his Nashville ambitions. I'm guessing the song wouldn't be as well received in say, New York :)

Sunday morning we were up early and drove north about 35 miles to attend the church of a preacher friend. After the service, he and his wife treated us to lunch at their home. We had a fun visit before hopping in the car for our three hour trip home.

I haven't updated on Mom in a while, so I'll take that opportunity now. She continues to recover from both the disease and the treatment. Chemo and radiation is a tough combination and she's definitely struggling. She had a catscan this morning and will meet with her oncologist next week for the results.

I try to be as positive as possible, regardless of the situation, but I've got to admit that Mom's situation doesn't look good. Please keep those prayers and positive vibes coming her way.