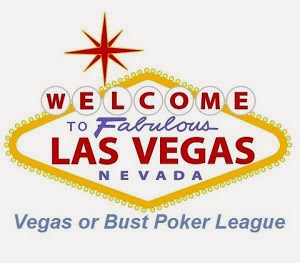 The Vegas or Bust Poker League met for the tenth of 12 league tournaments last Friday. At stake is two seats in the 2014 WSOP in Las Vegas along with airfare and hotel for our top two finishers at the end of league play.

We were all a little surprised that Larry showed as his mother was under hospice care with the end expected at any time. But as Larry explained it, he just needed to get away from the tension for a little while and the room was full of family members. As soon as he busted out of the tourney he headed back to the hospital.

As in our January tournament I started in second place, with Philly on my heels for the second seat. Needless to say, I wasn't happy that he was seated to my immediate left. My primary goal was to finish ahead of him and widen my lead.

League leader Annie busted first when she overplayed her pocket queens and ran into Ranger Rick's flopped set of jacks. Stamps was next to fall on his sword, followed by Dealer Larry. I took most of Larry's chips in a battle of the blinds. Larry completed from the SB and I peeked at a 6-3 offsuit and checked. The flop from hell appeared for him (6-6-6) and we both checked. He bet when a queen hit the turn and I smooth called with my quads, hoping he really did have a queen. A second queen appeared on the river and Larry once again bet. I three bet and took most of his chips when he called. He didn't show, but I can't imagine him calling with anything less than a Q in his hand.

Philly was next to drop when he pushed into Rick's quad fives, putting me in position to pull a little further ahead of him.

We played six handed for quite a while, but as the blinds increased Bobby Dee and J-Dawg received toe tags. I was next to go when Big Daddy called my push with 9-2 off and hit his duck on the flop. It sounds like a worse call than it actually was. I was short stacked and he had decent pot odds to make the call with ATC. And did. Buh-bye.

You can CLICK HERE for the latest standings. I'm in pretty good shape with only two tournaments left. As long as I finish in the middle of the pack in both of them I should be on my way to Vegas again this summer. Keeping my fingers crossed :)

Ending on a sad note, Dealer Larry's mother passed away just a few hours after he returned from our tournament. Condolences to Larry and his dad, Ollie the Accountant. Ms. Duck and I will attend her funeral service tomorrow afternoon.