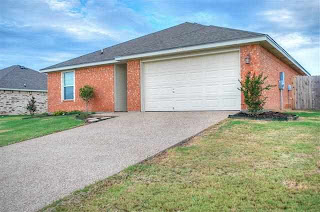 In an effort to help our daughter and her former fiancee, several years ago Ms. Duck and I agreed to co-sign a loan to get them into a "starter" home.

The train left the rails when our daughter ended the engagement, leaving the ex-fiancee in the home. Not good.

Said fiancee fell behind on the mortgage payments, so as co-signers, Ms. Duck and I stepped in and wrote a check for two payments to catch up.

A little money into the money pit.

Then we wrote a check for the annual property taxes. Twenty-eight hundred dollars worth.

More money into the money pit.

It took a while, but I finally convinced the ex to sell us his portion of the house for what was left on the note. We felt this was fair since we had paid most of the down payment and several months worth of mortgage payments. And don't forget those property taxes!

When we took possession of the house, it was a mess. The ex had let his dogs have the run of the place and there was dog crap everywhere. And urine. The stench was unbelievable.

Our only choice was to pull the carpet and start over. Ms. Duck selected a wood laminate flooring for the living area and master bedroom and we went to work. We also replaced the kitchen floor and both bathrooms, but we were able to shampoo the carpet in the other two bedrooms.

And even more money into the money pit. 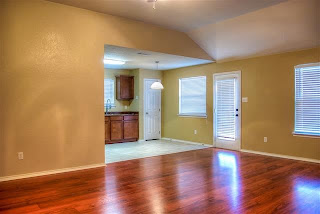 The ex had purchased material to build a privacy fence, but never got around to actually constructing the fence, so Sonny Boy and I had to take care of that chore. In August. In Texas. Not fun.

Once we got the house in decent shape, we made the poor decision to rent it, since the housing market was on its butt at the time. Once again, the tenant was unable to keep up with the payments, so he had to move out. Of course, our mortgage payment on the house continued.

At least this time the house was left in decent shape. A few touch ups inside, plus a fair amount of landscaping outside (for curb appeal) and we were ready to put our house on the market.

We met with a realtor last week and signed the papers, and yesterday the house hit the multiple listing circuit.

The housing market has improved, and the house is in one of the best school districts in the area, so we're hoping we won't have to drop our $108K price too much in order to sell it.

It'll be nice to get some of the money back that we've thrown in this pit.

Money pit anyone?
Posted by Lucki Duck at 8:54 AM