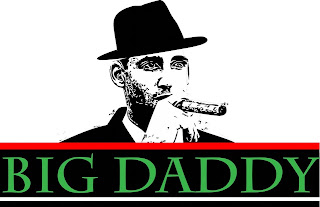 Last Friday was the third monthly tournament in our Vegas or Bust Poker League, marking the quarter point of our season. The top two finishers win a round trip to Las Vegas and a seat in the 2014 WSOP.

Last season Big Daddy was our weakest player, often overplaying weak hands and busting out early. The first two tourneys this season were no different, with him finishing tenth in both.

This night would be different.

Big Daddy began with a good start by doubling thru Tin Man when both had full houses, but Big Daddy's was bigger ("that's what she said"). Tin Man was severely crippled and went busto shortly thereafter.

Bobby Dee was the next to feel the wrath of Mr. Big, when Daddy hit a three outer on the river to send Bobby to the showers.

Stamps, J-Dawg, and Philly Phanatic were the next to fall on their swords, with Big Daddy doing the slaying on all but Philly.

Ranger Rick found himself short-stacked and shoved with a baby ace, only to be called by Mr. Bigs pocket jacks. You know it's your night when J-J actually holds up!

Dealer Larry was felted shortly after Rick, but looked like he would win the $20 High Hand Jackpot for the evening with quad jacks.

I was the next name on Big Daddy's hit list when he hit a three outer on the river to bust me in third place.

Heads up was between Big Daddy and Lil' Annie Okie, with Mr. Big holding a huge chip advantage. The toe-to-toe match didn't last long. Daddy toe-tagged Annie with flopped quad aces, winning both the tournament and the High Hand Jackpot.

His luck continued in the cash game following the tourney,  hitting draws with unusual regularity. He was on quite a roll and had a wall of chips when I surrendered and headed home, $8 lighter than when I sat down at the cash table.

Through three tournaments I'm in pretty good shape with 25 points, which is good for second place with nine months to go. Annie has been the best player so far with a first and two second place finishes, so we're all looking up at her right now. If so inclined, you can click here for the complete standings.

We play again on August 9th.