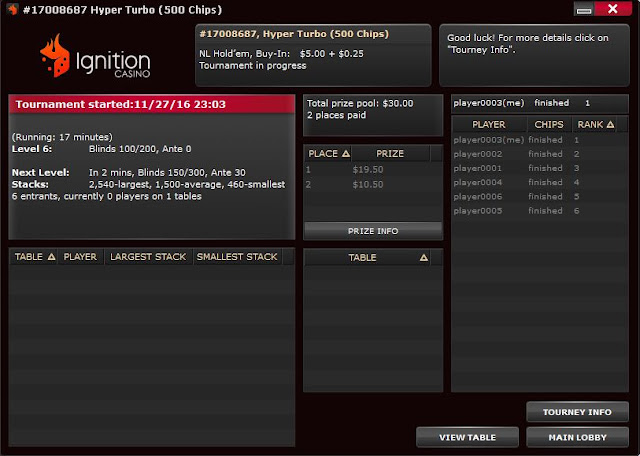 I set a goal at the beginning of the year to win 100 sit and go tournaments in a one year period. I made a small deposit on the Bovada poker site and was ready to get started.

It took a while to hit my stride, but last May I found my groove playing their "Super Turbo" tournaments. These are six-man tourneys that begin with 500 chips. Blinds start at a reasonable 10-20 level, but only last three minutes. I noticed a lot of marginal hands were overplayed, so I developed a strategy to trap players by limping top hands. Of course I would get burned occasionally, but overall it proved to be an effective weapon.

During the late summer Bovada became Ignition Poker. Both used the same skin, so the switch was seamless. I continued having success and neared my goal in October, well ahead of schedule. I fired up my laptop a couple weeks before Thanksgiving and reached my goal when I shipped my one hundredth SNG.

It wasn't an easy ride to reach 100. I lost almost 80% of my starting stack when I limped A-K offsuit at the 15-30 blind level. There was one limper, followed by a huge raise to 150. I pushed my entire 570 chips into the center and got called by the raiser's A-Q. The flop missed both of us, but all three cards were hearts. I held the king of hearts, but my opponent had the ace. The turn completed his flush and I was down to 110 chips. Not the best start.

On the button I pushed with Q-9 soooted and was called by the same player. The villain tabled J-9 and my hand held this time and I increased my stack to 250.

At the 25-50 level, I once again received one call when I shoved with A-J. This time I was up against A-2, and paired my jack on the flop. When the river card was flipped, I had doubled up again and was back in business with 600 chips.

Blind levels continued to increase, and I steadily increase my stack by stealing blinds. I doubled up again thru the chip leader when my A-2 beat his K-J when I hit trip deuces on the flop.

Down to three players, I now had over half the chips. The two short stacks got it all in preflop, with the shortest losing and we were down to a heads up match.

With blinds at 100-200, we were both pushing light. The final hand was my A-Q versus my opponents Q-9. Neither hand improved and I had won my 100th sit and go while increasing my bankroll by $19.50.

As of this writing, my total has increased to 111 tournaments won. I'll continue until the end of the year to see how many I can ship. Should be fun!

Till next time, win the flips.
Posted by Lucki Duck at 9:03 AM