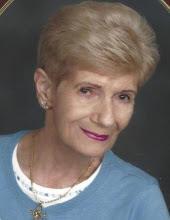 As you recall, Mom was moved into a hospice facility last Tuesday.

The staff took great care of her (and us), keeping her sedated and comfortable Tuesday night and into Wednesday morning. The room in which she was placed was actually a mini-suite with a separate room that housed a couch and recliner. A large flat screen TV mounted of the wall was a plus. There was also a kitchen area down the hall where we could eat meals and choose from a variety of free snacks.

Tuesday evening was a continuous stream of friends and family coming to say their goodbyes as word got out how sick Mom had become. My two sisters, my daughter and I decided to stay with her through the night. Since we had done the same the previous two nights, our plan was to take naps on the couch and chair while the other two kept watch. By doing this I was able to get my first shuteye in almost 72 hours. Although it was only 2 1/2 hours, it was enough to keep me going.

I also had to put in some time at work. Having a small, family-owned business is great, but it's difficult to juggle responsibilities when there is a family crisis. Even though my two brother-in-laws don't know much about our business, they agreed to hold down the fort while I stayed with Mom. I have an awesome family.

My mother's vital signs remained stable through the day on Wednesday, but started to falter in the evening. My sisters each took a hand and sang some of her favorite hymns as we watched her start to fade away. I called our minister just before 11pm and told him the end was near.

Around a dozen family members gathered around her bed around 11:15, standing in silence as the minister prayed. He finished his prayer and the nurse came in at 11:20 and pronounced her dead.

However, she didn't realize what a fighter my mother is. Upon checking a second time, she picked up an ever slight heartbeat and explained that respiration and heartbeat doesn't always stop at the same time. It was another 25 minutes before her heart quivered for the last time.

We had prayed for a peaceful transition from this world to the next for her and our prayers were answered. There was no sign of struggling or pain during her stay under hospice care.

The visitation was Saturday evening at a local funeral home, with her service on Sunday afternoon at her church of 12 years. She had a large turnout for both which I found comforting. We said our final goodbyes at a brief graveside service.

I'm mostly numb at the moment. Lack of sleep and the enormity of losing someone so important in your life is overwhelming. Plus the change in your daily activities is disconcerting. No more Wednesday dinner and Sunday lunch with her. No more taking her to hair appointments and activities at church.

I know over time the sorrow will ease. I'm happy she is no long struggling, but there is a big hole in my heart as I write this.

I shall miss her the rest of my days.
Posted by Lucki Duck at 9:16 AM