I received a $5 scratch-off lottery ticket titled "Trim the Tree" as a stocking stuffer this Christmas and it got me to wondering how bad an investment a lottery ticket really is. On the back of the ticket it states that my odds are 1:3.83, and that includes break-even prizes.

As part of my experiment, I have decided to keep a running total of wins and losses, plus my total dollar investment and net results. Similar to what I do with my sports betting.

As you may recall, my initial attempt to win a little coin from the state was a failure. The "Trim the Tree" $5 scratch-off didn't hit, so I'm down five buckos.

Since it's Super Bowl week, I decided to purchase a "Dallas Cowboys" $5 scratch off for two reasons. First, I figure it will be one of the few times that the words "Cowboys" and "Super Bowl" will be mentioned in the same sentence and two, since the Cowboys were 8-8 the last three years, I fully expect to win $5 on this ticket. Break even- like the Cowboys :)

Cash prizes on the ticket range from $5 to $100,000, plus there are other non-cash prizes such as a draft day pass that allows you to sit in the "War Room" with Jerry Jones as he screws up another draft. I'd rather suffer thru a root canal. 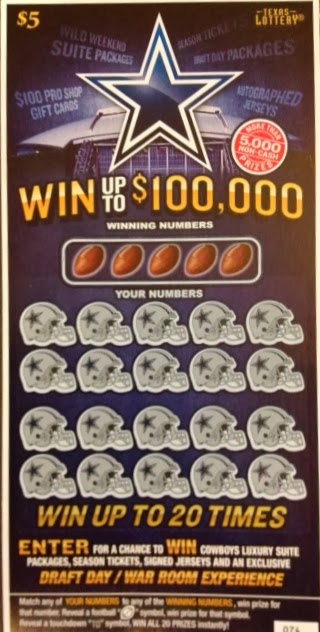 As you can see below, we have revealed the five "Winning Numbers" which have been anything but for the first half of the ticket. Hopefully, it'll be a second half ticket :)

Well, the third quarter was more of the same.

After the last five numbers are cleared, it appears we have a total loser for the second week in a row.

Hopefully, next week will be better.