Sonny Boy and I took a road trip to Arlington Sunday to see the Cowboys/Seahawks match-up. I hadn't taken him to a game since the Cowboys vacated Texas Stadium and moved in to JerryWorld a few years ago.

We had seen a high school playoff game at the new stadium, but this was our first time to see the Pokes play there, and it was quite a scene to behold.

If you watch many NFL games, you are aware of the extrodinary amount of downtime dedicated to selling beer and pick up trucks. Jerry has that covered with his 60 yard long TV screen (HD of course) to entertain you during the three and a half hours you spend there watching 60 minutes of football.

The game itself wasn't too bad... or too good. The Dallas offense moved at will between the twenties, but then bogged down in the red zone and settled for field goals. Nothing new there. But, they managed to get the ball in the endzone in the second half a couple times to add one in the left hand column.

Tavarius Jackson is as bad as advertised. Bad reads, bad throws, interceptions, he ran the gammit. Seattle will have to find a QB before they will be much of a threat in this league.

The highlight of the game for me was the halftime ceremony that admitted Drew Pearson, Larry Allen, and Charles Haley into the Cowboys Ring of Honor. All three players seemed genuinely touched at being accepted into this fraternity. Plus, it was exciting to see some of the old Cowboys such as Staubach, Dorsett, Randy White, Emmitt, Mel Renfro, etc. 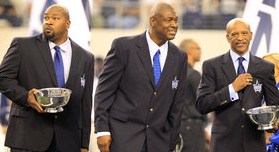 Speaking of Drew Pearson, remember this one Vikings fans? 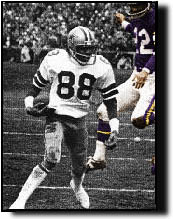 Heh.
Sonny Boy and I had a great time, sharing some conversation over breakfast at Cracker Barrel, followed by sharing our passion for the Cowboys at the game and then some more discussion on the two hour drive home.
Hopefully, he'll look back on these trips as fondly as I remember my trips to the Cotton Bowl with my Dad to see Meredith, Hayes, Perkins, Lilly, and Landry under the lights almost every Thanksgiving.
Full circle.
Posted by Lucki Duck at 9:45 PM