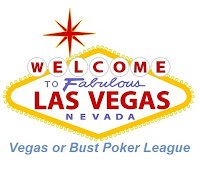 Last Friday was the fifth of 12 monthly tournaments in our local poker league. The top two players win a trip to Las Vegas and a buy-in to a WSOP event.

I was holding on to second place by a thread coming in, and my goal was to finish in the top three and gain a little on the field immediately behind me. Consecutive hands in the middle of the tourney prevented that from happening.

Dealer Larry was the first to fall on his sword, which was good for me because he was one of the players right behind me. Big Daddy was next, followed by Rick, then Tin Man.

Annie felted Stamps when her pocket queens held against his A-K.

The beginning of the end for me began with pocket aces (doesn't it always?). Blinds were up to $50-100 and I was sitting on a stack of around $2,200. With two limpers in front, I popped it to $250, hoping to get a call, but only one. J-Dawg complied and we saw a flop of K-Q-4 rainbow. My hope was that one of the big cards had hit him for top pair. J-Dawg checked, I bet $200 and he smooth called. Things got a little scary on the turn when a 10 appeared, but I bet another $250 after J-Dawg checked and was called again. J-Dawg pushed 600 chips forward on a useless river card. I debated for a minute or so before folding my A-A face up.

"Oh, I don't think I could do that!" said Philly. Then J-Dawg flipped his K-Q for a flopped two pair.

The very next hand I had K-Q on the button. With one limper in front, I once again raised to $250. Tin Man completed from the big blind and the limper folded. Tin Man is very tight, so I wasn't happy with the A-K-6 flop, putting him on an ace. We both checked the flop and turn and saw a Q on the river. Tin man pushed his last $700 in and even after knowing deep down that I was beaten, I didn't want to believe it and called with my two pair. Tin Man flipped his cards on their back, exposing J-T for the straight.

I played that hand badly on so many levels that I felt that I got what I deserved.

With blinds up to $75-150, I pushed my last $450 from the button with A-A. Big Daddy called from the SB with 9-9 and everyone else folded. Big Daddy is one of the luckiest players in our league and I wasn't happy to have my fate in his hands, even if I had him dominated. Bobby Dee mentioned he had folded pocket 9's, so that made me feel a little better.

I hit a third ace on the flop, but there were two spades. Big Daddy had a spade...I didn't.

I don't remember exactly what card came on the turn, but I do remember it was a spade.

Was there any doubt the river was going to be a spade?

Death came quickly as the fourth spade hit the board, giving Big Daddy his flush and sending me home in ninth place. Ugh.

"Send those chips to Big Daddy!" my opponent exclaimed, not noticing the spade was an ace, giving me quads.

In my best Lee Corso voice I said, "Not so fast my friend!"

I was able to hang around for a while, but could never get my footing, finally receiving my toe-tag when my 8-9 soooted didn't improve sending me home in fifth place.

Lil' Annie Okie came in fourth, followed by J-Dawg in third. Philly outlasted Bobby in the heads-up match to win the tournament and the 10 points. Unfortunately it moved him ahead of me in the league standings, dropping me to third.

There are still seven tourneys left, so I still have time, but I'm going to have to do better than fifth place to make any headway. Click here for the complete standings.

I did manage to win a few bucks in the cash game. It's unusual to hit quad aces, but not only did I hit them in the tournament, I also managed to do it again in the cash game and got paid off by Big Daddy both times. Twice in one night. Sweet!

Till next time, win the flips.
Posted by Lucki Duck at 9:16 AM