This episode of our lottery adventure features another $5 scratch-off ticket titled "Bingo."

The top prize is $50K, with the odds of cashing for ant amount at 3.5-1. The ticket has six separate games, with the object to score a "bingo" on any of the six. There are three ways to achieve a bingo, the first being a straight linr bingo, which is the most well known. You can also win by matching the numbers in each of the four corners (a "corner" bingo), or an "X" bingo, which is making an X across the card.

To begin we are to scratch off all the "Caller's Card" numbers and also the "Bonus" numbers, so let's do that first. I think I'll use my "lucky chip" to do the deed. 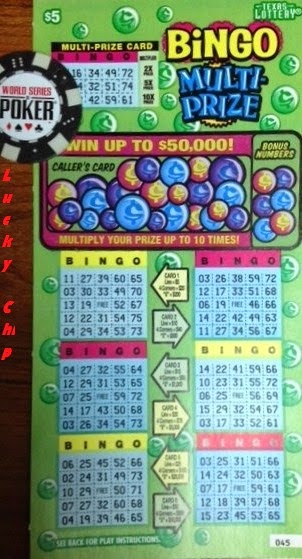 After revealing the numbers we'll need to match, I noticed "O-67." Six-seven (sooooted of course) is my favorite non-premium hand to play, so that's got to be a good sign. Right?

Let's move on to the first two games and see if we can hit anything.

Oops! It looks like we don't have to scratch off the lower part of the ticket, just match the numbers. After going across the top line of the "Caller's Card" and "Bonus" numbers, and marking an "X" on the ones that match (just like the real thing), here's what our cards look like. Hopefully, you can read the prize amounts in the picture. So far we only have three corner numbers, but also have three of the five numbers we need to make a straight line bingo on two cards.

Let's take a look at the second line to see if we hit anything.

After marking the matching numbers on the second line, it looks like we have a shot at a corner bingo on two of the cards, with one of them  (game 6) a $200 winner if we hit. If we hit on game 4, it'll pay $75 and would definitely put a smile on my face!

On to the last line.

So close. As you can see in the picture, we came close on several of the games, but couldn't pull off a win.

Although this ticket is a loser, I think I enjoyed playing it more than any of the others I've tried. Next time I think I'll scratch off the "Caller's Card" and "Bonus" numbers one line at a time. It's hard not to look ahead when you're close to a bingo, so scratching one line at a time will increase the expectation.

So we drop a redbird to the great state of Texas. Here's hoping the next one will be a winner :)